Abductees’ mothers tragedies and suffering have varied between the abduction, disappearance, and brutal torture of their sons, and killing them by airstrikes. However, what really broke their hearts this time was burying their sons without informing families or allowing them to have one final look at them.

Houthi armed group has buried 72 bodies of the remaining victims of the bombing. Houthis dug seven trenches. Each trench contained 10 small graves where unidentified bodies were buried.Abductees’ Mothers Association expressed its great sadness and grief as its representatives attended the burial of the unidentified bodies. It also issued a condolence and consolation statement sympathizing with mothers pain. 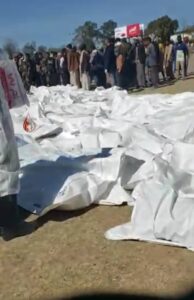 Some victims’ family members had been detained during body identification. The association documented 3 reports where family members were arrested while identifying bodies which stopped many families from travelling to Dhamar in fear of further abduction and detention.Abductees’ Mothers Association had previously issued a report, titled The Great Grave, which highlighted that there were 182 abductees and war prisoners held at Dhamar Community College Prison when it was bombed by Arab Coalition air force with seven air strikes starting at 12:06am on Sunday, September 1st, 2019. The strikes were mainly directed towards the two-story building and college campus yard. The air strikes continued to target the survivors who tried to escape. Those who managed to escape were targeted by Houthi bullets. Houthi armed group hunt down escapees and took them to different prisons. According to the association figures, the number of the victims mounted to 137 dead abductees and 54 injured others.

For days, victims’ families had no clue of their relative’s fate. Many of them contacted IRC, who in turn stated that no list of victims had been presented by Houthi armed group. On September 7th, 2019, a list of the victims, attached to an official note, was delivered to Attorney General by Houthi armed group. The list contained 142 dead victims and 42 injured others. However, the list was not totally accurate despite taking a week to be issued.Most of prison bombing victims were abductees who had been taken either at Houthi checkpoints or from their homes and workplace. Only very few of them had been captured during armed conflicts.

Abductees’ Mothers Association called upon all competent authorities, mainly the United Nations and its Special Envoy, Matin Griffiths, to take the necessary serious steps towards releasing the abductees. It, also, called upon the Yemeni government and Arab Coalition to include abductees’ files in all agreements in order to ease their release. The association called upon all human rights organizations, nationally and internationally, to carry out their duties towards the abductees and forcibly hidden individuals, to create the needed pressure on Houthi armed group in order to stop armed abductions, and to work hard to bring those involved in committing violations against abductees to justice.