As the war in Yemen approaches its seventh year, many families continue to suffer as the fate of their loved ones remains unknown in both official and unofficial detention centers run by different parties to the conflict across Yemen.
We stand in solidarity with families of hundreds of civilians who either have been arbitrarily detained, abducted or forcibly disappeared for no reason, or particularly for their political views, profession, activism, or religious affiliation, and urge all parties to the conflict to respond to their pleas and reveal the fate and whereabouts of the forcibly disappeared, and urgently release all those arbitrarily detained.
The parties to the conflict continue to this day to prioritize the exchange of military detainees over civilian detainees following the Stockholm talks in 2018. We therefore demand that the immediate release of arbitrarily detained civilian detainees, including journalists and activists, is prioritized by all parties to the conflict and seriously considered as an important issue that touches the lives of thousands of Yemeni families who are left to their own devices in fighting for truth and justice for their loved ones. The families of four journalists who were sentenced to death in April by a court in Sanaa on charges related to their journalistic work is but one example. 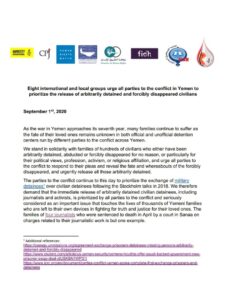 Abdulkhaleq Amran, Akram al-Waleedi, Hareth Hameed, and Tawfiq al-Mansouri, as well as five of their colleagues, continue to be held and have been tortured and denied medical care for more than five years. Journalists throughout Yemen also continue to be arbitrarily detained and disappeared, such as Waheed al-Sufi, who has been missing for over five years.
The parties to the conflict, including Saudi/UAE-led coalition and Ansar Allah (the Houthis), have committed unlawful attacks against detention centers, killing and injuring a number of detainees.
As part of their basic rights, detainees should be given access to legal assistance and legal proceedings that adhere to international fair trial standards. Prison conditions, including access to medical care, sanitation and hygiene must be improved for all those deprived of their liberty. Given the risk of an outbreak of COVID-19 in over-crowded prisons, where access to healthcare is almost non-existent, current conditions pose a threat to the lives of all prisoners and prison officials.
Torture and ill-treatment in both official and unofficial detention centres need to be stopped and prevented. The parties to the conflict should respect international humanitarian law, perpetrators should be held accountable and appropriate redress should be provided to victims. 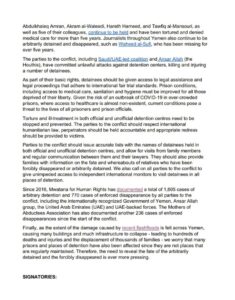 Parties to the conflict should issue accurate lists with the names of detainees held in both official and unofficial detention centres, and allow for visits from family members and regular communication between them and their lawyers. They should also provide families with information on the fate and whereabouts of relatives who have been forcibly disappeared or arbitrarily detained. We also call on all parties to the conflict to give unimpeded access to independent international monitors to visit detainees in all places of detention.
Since 2016, Mwatana for Human Rights has documented a total of 1,605 cases of arbitrary detention and 770 cases of enforced disappearance by all parties to the conflict, including the internationally recognized Government of Yemen, Ansar Allah group, the United Arab Emirates (UAE) and UAE-backed forces. The Mothers of Abductees Association has also documented another 236 cases of enforced disappearances since the start of the conflict. 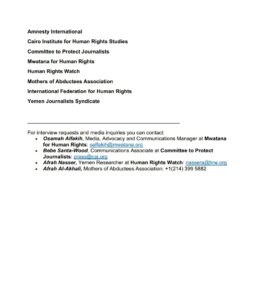 Finally, as the extent of the damage caused by recent flashfloods is felt across Yemen, causing many buildings and much infrastructure to collapse – leading to hundreds of deaths and injuries and the displacement of thousands of families – we worry that many prisons and places of detention have also been affected since they are not places that are regularly maintained. Therefore, the need to reveal the fate of the arbitrarily detained and the forcibly disappeared is ever more pressing.