Abductees’ Mothers Association demanded the government, Supreme Judicial Council, and Attorney General to urgently take the needed actions to release their arbitrarily detained sons. The demands were made in a protesting rally held by Arab Coalition headquarters today morning. 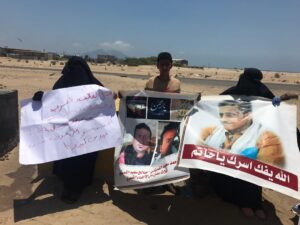 The rally statement condemned ignoring Attorney General’s 7th decree of 2020 regarding the temporary release of all abductees and granting district attorneys exceptional authorities, due to Covid-19 pandemic, to release inmates, arbitrary detained, and forcibly disappeared persons, whom had been unlawfully arrested and detained. 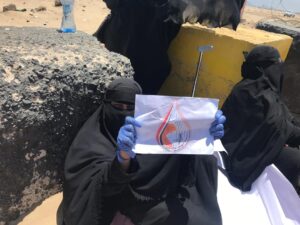 It held the Attorney General, Judicial Council, and Be’er Ahmed Prison Administration for the lives and safety of all abductees.

The statement called upon the committee formed by Arab Coalition to make a greater effort to save their abducted sons before the outbreak of Covid-19 in Yemen. It, also, called upon the UN Secretary-General, OHCHR, IRC, and all human rights organizations to seriously create the required pressure on the competent authorities to save their abducted, detained, and forcibly disappeared sons. 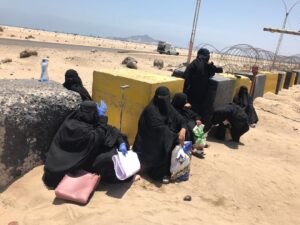 The rally itself was part of many rallies held by Abductees’ Mothers Association in Aden as their fears for their sons multiply amidst international measures taken to stop the widespread of Covid-19 and repeated calls of UN Secretary-General and OHCHR to release all abductees and detainees around the world.

Mothers live in constant fear for their sons’ lives, 40 of whom are forcibly disappeared and 42 others unlawfully detained at Be’er Ahmed Prison.