In its rally today by the Office of the United Nations High Commissioner for Human Rights in Sana’a, Abductees’ Mothers Association condemned the murder of the abductee, Mohsen Mohammed Ali Ali Al-Qadi by Houthi armed group at a prison in Dhamar. 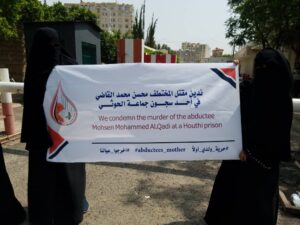 The murder took place two months after his abduction and forced disappearance on April 12th, 2020. Mohsen’s family had not heard from him until the news of his death reached them from a released abductee. The body was kept at Dhamar Hospital’s morgue for more than a year.

Moreover, Houthi armed group only turned in the body after denying the family’s request of examining the body and forcing the family to immediately bury the body without any examination.

The burial took place on July 29th, 2021.
In its statement, the association condemned the murder of the Al-Qadi, 38 years old, and the many other crimes committed against their abducted and forcibly disappeared sons which had led to the death of 88 victims due to torture and intentional killing at prisons, and stressed that such crimes must not go unpunished.

The association, also, condemned the international and local silence towards the crimes carried out against their abducted and forcibly disappeared sons.

Mothers held Houthi armed group fully responsible for the lives and safety of their abducted and forcibly disappeared sons at prisons.

They and reminded the international community of its commitment to their humanitarian duties, and demanded it to mount the needed pressure in order to release all abductees and forcibly disappeared persons and grant them their freedom and rights.