Abductees’ Mothers Association in Ibb stated that there were 198 abductees who had been subjected to physical and psychological torture, and healthcare negligence, and prevented from taking their medications by Houthi armed group. 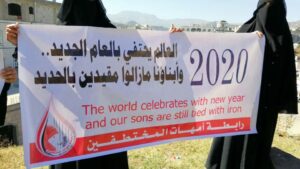 The statement was issued during a rally held this morning by Abductees’ Mothers Association in Ibb. The rally itself was organized to protest against and condemn the horrible healthcare conditions the abductees had been suffering for five years, as well as forced disappearance, and physical and psychological torture they are subjected to at Houthi prisons. 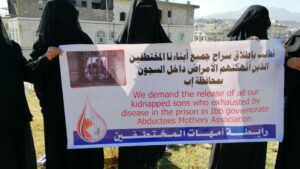 In the statement, mothers said that five abductees were in serious danger as they are suffering from various heart diseases, renal function impairment, and liver impairment. 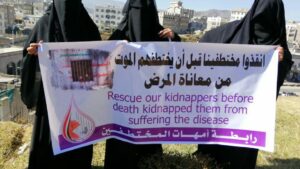 The statement held Houthi armed group responsible for the lives and safety of abductees, called upon human right organizations, mainly OHCHR and IRC, to provide the needed help and support for abductees’ mothers to save their sons. It concluded by demanding the unconditional release for all abductees and forcibly disappeared individuals.