By peacefully protesting in order to make mothers’ voices heard nearby the UN Special Envoy in Sana’a, Abductees’ Mothers Association sent a strongly worded letter to the teams of both the government and Houthi armed group convening in Switzerland regarding the case of abductees and forcibly disappeared persons.

Mothers condemned, in their letters, the negative attitudes of both towards the abductees, despite COVID-19 pandemic. The letter addressed the convening committees and elaborated how they had arrogantly stood their inhumanly grounds, making family contacts and visits impossible, and pressured families to accepting prisoners exchange deals based on their conditions, where rights were not granted and abductees were exiled. 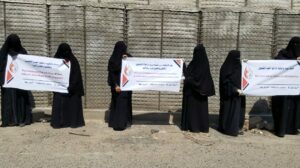 In their protesting rally this morning by the UN Special Envoy in Sana’a, mothers said that, almost two years had passed since Stockholm Agreement was signed, which stated that all abductees, war prisoners, detainees, and forcibly disappeared and house arrested persons must all be released. The agreement was based on different principles, mainly releasing all abductees held by all parties unconditionally and without any exceptions in order to completely resolve the issue. Yet, the tangible actions carried out on the ground since then were totally different.

Mothers held up banners emphasizing that signing agreements without implementing them only increasing the suffering of abductees and forcibly disappeared persons, as well as their families, and that freedom is a lawful right granted in all national and international agreements and laws. They loudly shouted “We’ve been calling for five years to release our sons.”, “Every day a convention and negotiation while my son is dying in his prison.”, and “Teams and committees, fulfill your promises.”
Mothers said that they had, lately, proposed several recommendations, with the help of many supporters, to overcome the obstacles stopping both parties from implementing the agreement. However, the proposals were always turned down stressing that bravery had never been in violating the dignity of Yemenis. 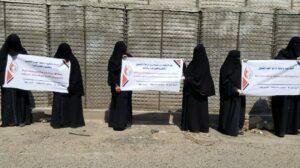 In the letter, the association confirmed that, during 2019, the association monitored 1326 cases of abducting and forcibly disappearing civilians by Houthi armed group, and 14 similar cases carried out by the government. Additionally, 704 abductees had been subjected to torture and mistreatment by Houthi armed group while 26 others were also mistreated and tortured by the government. Houthi group referred 57 abductees to court. The Specialized Criminal Court in Sana’a issued 47 execution judgements upon 47 civilian abductees. Moreover, abductees and detainees had been left vulnerable to more violations, namely murder, as 20 abductees were killed inside Houthi prisons in 2019 alone, and 137 others were killed in an air strike carried out by Arab Coalition which targeted Dhamar Community College Prison.

Mothers said that they were still living the agony and facing the violations all the time, and, Yet, could not afford to give up, demanding both parties to release all abductees and forcibly disappeared persons, whose arrest was unlawfully in regard to the armed conflicts, as freedom is their right, and releasing them is a national commitment they must abide by in order to build the necessary trust between them and the Yemeni population. 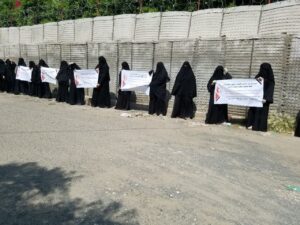 They, also, demanded compensation and apology for all abduction, arbitrary detention, forced disappearance, and torture victims, stopping such crimes, and closing down all secret and unofficial prisons and detention centres.
At the conclusion of the letter, mother highlighted that hundreds of Yemenis, victims of abduction and forced disappearance, and thousands of their family members kept their last ray of hope held by the convening teams’ good intentions to achieve peace by making the meeting an actual implementation of the agreement by clearing all prisons and detention centres and unconditionally releasing all abductees and forcibly disappeared persons.