In Taiz, Abductees’ Mothers Association held, today, a seminar titled “Release Them for Prevailing Peace” in conjunction with the International Peace Day, September 21st. During the seminar, the representative of the association in Taiz, Asma’a Al-Ray’i, spoke of the suffering of mothers and families of the abducted, arbitrarily arrested, and forcibly disappeared individuals while waiting for peace resolutions leading to their sons’ freedom. She talked about Abductees’ Mothers Association’s determined efforts in all governorates and under different conditions, attempting to make a difference in order to have their abducted and forcibly disappeared sons released from all prisons in Yemen. 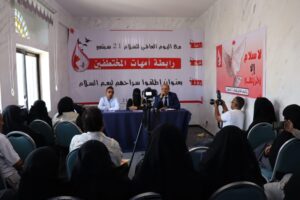 In her speech, Al-Ray’i reiterated the association’s participation at releasing 3 women who had been unlawfully detained by Houthi armed group, 845 abductees formerly held by Houthis, 68 arbitrarily arrested persons held by Security Belt Forces, and 8 arbitrarily detained individuals held by the government’s security authorities. The efforts made were undertaken by the association in collaboration with local and international mediators, social influencer, and human rights organizations, holding 281 meetings in an attempt to release the abductees, and arbitrarily detained and forcibly disappeared persons. 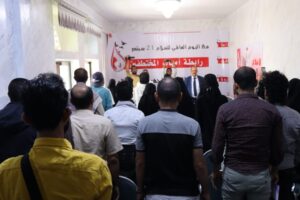 Head of Social Peace Promotion and Legal Protection Foundation, Abdulla Shaddad, demanded, during the seminar, the political leaders and activists to take serious actions towards peace by viewing the abductees’ case as a humanitarian case, which real peace cannot be made without. He highlighted the damage abductees and their families suffer while waiting and working for release, as working as mediators is extremely complicated since some parties are difficult to be persuaded to release certain individuals in exchange for others, which in turn delays and disrupts the exchange operations. 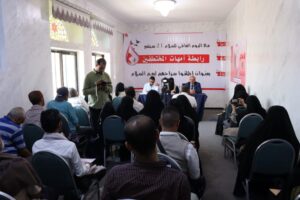 Maher Al-Absi, an activist, talked about peace in Yemen. He explained that conflicting parties have, for seven years, been facing the decision of ceasefire and unsatisfactory political settlement. As the war has caused more humanitarian suffering, a successful political settlement has to compel all parties to make compromises. He elaborated that the political and geographical divisions would lead to re-evaluate the negotiations mechanisms, claiming that the settlement proposed by the United Nations between tow parties would unlikely lead to lasting peace, and including all parties in the negotiations has become a necessity.

Abductees’ Mothers Association concluded the seminar be recommending to release all abducted women, and all abducted, arbitrarily arrested, and forcibly disappeared civilians, to drop and stop all execution judgements issued in relation to the war, to grant that the crimes of abduction and torture would not go unpunished, to compensate the released abductees, to prepare physical and psychological rehabilitation programs, and to empower the role of Yemeni mediators in order to work on unconditionally releasing abductees, namely abducted females, children and seniors.