In Conjunction with the International Day of the Victims of Enforced Disappearance, Abductees’ Mothers Association in Aden demanded disclosing the fate of their sons who had been forcibly disappeared since 2016. 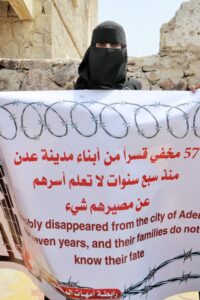 In their protesting rally this morning by Alma’asheeq Presidential Palace, mothers stated that there was no news of the abductees’ medical conditions and safety. In one case, a family only heard of their son’s arrest from media. The last piece of information they received was that he was transferred to a field hospital run by a Red Cross committee, as a result of an injury in his foot due torture. It was mentioned that he was handcuffed to a wheelchair when hospitalized, and that he had been transferred into different prisons. His family had no clue of his condition since then. 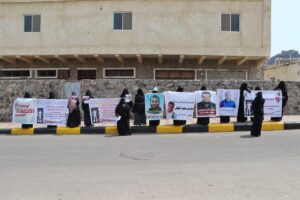 In their rally statement, mothers held the Southern Transitional Council’s Security Belt forces completely accountable for the lives and safety of the forcibly disappeared individuals. They demanded the Presidential Leadership Council and the whole government to take serious actions to disclose the fate of their forcibly disappeared sons. 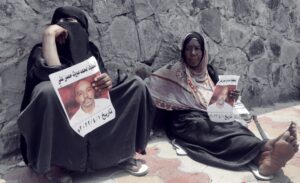 Mothers disapproved the procrastination of the case of the forcibly disappeared, and refusing to disclose their fate, and greatly condemned the systematic emotional manipulation families face by the abducting parties, by denying detaining them and refusing uncovering their whereabouts.

During the rally, a mother was subjected to physical assault by one of the guards. Two journalists were prevented of covering the rally, and were taken for interrogation, but released eventually. A female journalist was arrested and her camera was confiscated. Her bag was inspected, and she was only let go after mothers made a great commotion, demanding her release.