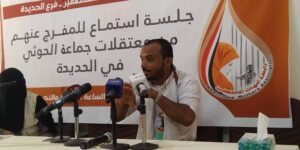 The released, Suleiman Al-Humaidi, stated about the violations and torture he was subjected to, such as beatings on the hands, pulling out nails, deprivation of contact with family, preventing from food and entering bathroom for only five minutes during the whole day. He also gave his testimony to the death of the abductees Ali  Al-Ammar and Khaled Al-Haith inside Houthi prisons under torture and the fabricated accusations of the abductees such as monitoring and sending coordinates to the coalition. 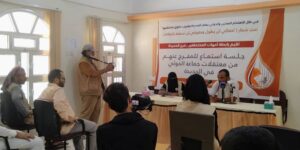 The released abductee, Essam Al-Zindani, from the Capital city also gave his intervention in which he testified about the violations he had heard that affected hodaidi abductees during his detention with them in the Political Security Prison in Sana’a, such as their detention in hangars and basements despite the high temperature, which caused some of them to suffocate and skin ulcers to others.  Lack of water, torture with skewers heated with fire and placed on the abductees’ back, and the torture the abductees suffered during the process of transferring them from Hodeidah Governorate to the capital Sana’a, handcuffed all the way with their eyes closed. Then they were put in a small cell  that broadens to 15 persons,  but thirty are put in each cell, in addition to depriving them of visits or contacting their families, as well as beatings with sticks on their necks, which caused them to have a hernia of the spine. 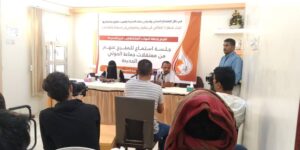 At the end of the session, Article 13 of the Convention against Torture was being reminded, that was ratified by Yemen,in which it focused on ensuring that any individual claiming to have been subjected to torture in a territory under its jurisdiction has the right to make a complaint to its competent authorities, and his case has to be examined promptly and impartially. All the necessary steps should be made to ensure that the complainant and witnesses are protected from all kinds of ill-treatment or intimidation as a result of his complaint, or any evidence presented.
As well as Article 4 of the same convention, stipulates that all acts of torture are punishable offenses under its criminal law.