In Taiz, Abductees’ Mothers Association held today a press conference with former forcibly disappeared persons and their families, in collaboration with Defa’a for Rights and Liberties and in conjunction with the International Day of the Disappeared.
Activist Wafa’a Al-Qadasi said “On this day, families, activists, human rights defenders, human rights organizations, and the whole world make their calls to uncover the fate of forced disappearance victims and to release them. They demand warring parties in Yemen to stop such actions which are considered freedom violations and are usually accompanied with torture and killing.” 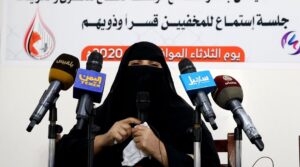 During the hearing, Abdulghani Al-Haij, a former abductee, spoke of his abduction by Houthi armed group on January 2nd, 2018 from the school he used to work at and his forced disappearance period at Alsaleh Prison. He said that his detention at Alsaleh Prison has affected his mental health until now and his family faced great suffering, hearing about his abduction and trying to figure out where he was. He and the rest of abductees and forcibly disappeared persons were worried about being used as human shields. 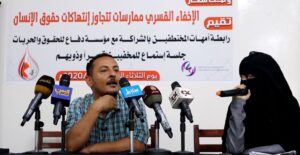 The mother of the forcibly disappeared Khaled Al-Shahari, who was abducted on July 22nd, 2017, talked about her son’s abduction and disappearance by Abu Alabash outlaw band, and demanded uncovering his fate and conditions.
Khaled Al-Shuja’a, a former abductee, talked about storming his house and abducting 5 of his brothers by Houthis in 2015. 3 of his brothers have been released since then while the other two are still forcibly disappeared. Khaled demanded uncovering the fate of his brothers. 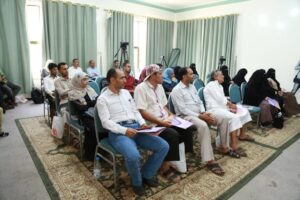 The mother of Najm Aldeen Al-Same’I, 16 years old, wondered why her sons was abducted and disappeared on March 25th, 2017, by armed men who follow military personnel from Usaifera, Taiz, while he had no political affiliation.
Mohammed Al-Sanawi’s wife said “My husband has been forcibly disappeared by Houthi armed group since 2015, by Houthi armed group. We have had no clue where he is, or whether he is dead or alive, ever since. My father in law passed away two days ago, his only wish was to see his son once before dying.” She added “My daughter has been suffering from a heart issue. Now, she has a mental disorder because of her father absence. We demand all human rights organizations to help uncover my husband’s fate.” 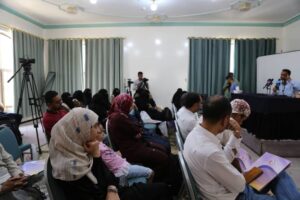 In a speech given by Asma’a Al-Ra’ei, the association’s representative in Taiz, she stated that Abductees’ Mother Association had monitored 3862 cases of forced disappearance since 2016, committed by all violating parties, mainly Houthi armed group, Southern Transitional Council, and the government. 236 abductees are still forcibly disappeared until this day.

Al-Ra’ei called upon all human rights organizations to consider, in their agenda and plans, providing the necessary support to support the victims of forced disappearance and their families, and demanded uncovering the fate of and unconditionally releasing all forcibly disappeared persons.