In a report presented to Abductees’ Mothers Association, the mother of Ashraf Thabet Mohammed Sa’ad, a 17-year-old abductee, stated that her son was abducted on December 4th, 2019 while he was attending a General People’s Congress party’s ceremony at Mokha District. After two weeks of disappearance and search, his family found out that Ashraf was detained at Abu Musa military base, which is controlled by Tareq Saleh forces, in Alkhawkha district, Alhudayda.

That family was eventually allowed to visit Ashraf in July, almost 8 months after the abduction.

To their shock, his body and face were covered with torture and mistreatment scars.  Ashraf’s mother reported that her son was imprisoned and faced with trumped-up charges. According to her, the charges contradict Ashraf’s mental disabilities. 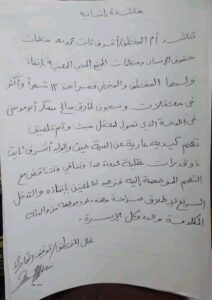 At Abductees’ Mothers Association, we demand saving the life of Ashraf Thabet, and hold the abductors, namely Tareq Saleh’s forces stationed at Abu Musa military base at Alkhawkha, fully responsible for his life and safety.

We call upon all human rights organizations, locally and internationally, and all activists to mount all types of necessary pressure until Asharf returns to his sick mother safe and sound.