At Tuesday night, Abductees’ Mothers Association introduced its fourth annual report titled, Mothers Awaiting Justice. The introduction was held via Zoom application as a commitment to practicing social distancing amidst COVID-19 global outbreak. The introduction was attended by human organizations’ representatives as well as many other activists, journalists, lawyers, and TV channels representatives.

For four years, mothers of abductees and arbitrarily arrested and forcibly disappeared persons stood by official and unofficial prisons, courts, ministries, justice agencies, international organizations, and the United Nations agencies, including the office of the Special Envoy to Yemen, Martin Griffiths, in order to reach long-gone justice. They were given the strength and endurance by their justified cause, lawfully strong demands, and resilient belief in the innocence of their abducted sons. They used their voices as messages sent during their peaceful rallies. Yet, no answer was given to them and their sons stayed imprisoned.

Thus, Abductees’ Mothers Association was founded in April 2016 for the purpose of documenting and monitoring the cases of abduction, detention, and forced disappearance carried out by Houthi armed group, military and security organizations in Aden, and the legitimate government.

The association documented, using video and audio, the testaments of 200 former abductees, who had been imprisoned at different governorates. The former abductees spoke of the violations they were subjected to such as forced disappearance, physical and psychological torture, mistreatment, and the prevention of visits, contacting families, and medical care. Monitoring teams visited 331 relatives of abduction victims, who spoke of the violations against them and their abducted relatives. Field personnel met with 80 families of Dhamar Community College Bombing victims, documented the incidents site, and attended the mass burials of victims.

The association closely watched the committees formed by Houthi armed group and the government regarding war prisoners and abductees. It anticipated the outcomes of Amman Discussions and the implementation of Stockholm Agreement. Yet the case was derailed and turned from a humanitarian case to a political case used for political bargaining.

Abductees’ Mothers Association held four meetings with the representative of the Office of the High Commissioner for Human Rights and its human rights staff, and 7 meetings with protection staff of the International Committee of the Red Cross. During meetings, the association representatives presented and discussed the violations carried out against abductees and detainees in terms of abduction and detention.

Death Due to Bombing, Torture, and Medical Negligence

Abductees’ Mothers Association monitored the death of 158 abductees inside prisons and detention centers. The cause of death was always categorized under coalition bombings, torture, or prevention of medical care.

Death by torture is considered the most brutal crime carried out against abductees, where human rights violators inhumanly torture individuals in order to coerce them to admit to crimes. During 2019, 20 abductees were tortured to death. 17 of them were killed inside Houthi prisons, and three in military and security prisons in Aden, two of them were from Aden and the third was from Dhamar. All abductees had been forcibly disappeared and most of them were held at unofficial and secret detention centers. Victims’ families were contacted with and told of their relatives’ deaths. Many authorities refused to hand in the dead bodies to their families. The report presented five of these cases.

The association received 196 reports regarding medical care prevention, 174 of which were of abductees held by Houthi armed group, and 12 of them were held by the government. Medical care negligence reached its worst cases at detention centers.
In 2019, TB severely spread among abductees at Community College Prison in Dhamar. There were 11 confirmed cases and a 31-year-old abductee, Helal Al-Jaraf, died of it.

Violation Against the Rights of Freedom and Liberties

Abductees’ Mothers Association monitored 1059 cases of abduction and arrest. 1030 of these cases were carried out by Houthi armed group, among of which there were 23 victims and 11 minors. There 18 detainees arrested by military and security organizations in Aden, and 11 held by the government in Ma’rib.

The association monitored 14 cases of mass abductions carried out by Houthi armed group within its areas of control. The victims of these abductions were more than 223, many of whom were children. The association confirmed the release of only 144 individuals and was unable to know the fate of the rest. Mostly, the charges were; attending memorial services at government-controlled areas, travelling from a governorate to another, refusing to pay unlawful taxes, receiving payments from government-controlled areas, or refusing military recruitment. 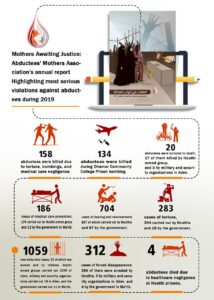 Once an individual is abducted by Houthi armed group, he or she becomes forcibly disappeared. Often, the forced disappearance periods are spent at secret detention centers such as; houses, educational facilities, and mosques, all of which had been turned by Houthis to detention centers. During forced disappearance periods, Houthi armed group subjected abductees to brutal torture, physically and psychologically, to reach the extent of murder as in many documented cases and presented by the association in the report.

The report presented statistics and testaments of former abductees regarding the mistreatment and torture abducted civilians are subjected to starting at the first moments of abduction. All abducting parties use physical and psychological torture to coerce abductees to admit to their accusations and sign blank pieces of paper, which are later filled by interrogators.

In 2019, abductees were subjected to different methods of physical torture, especially during forced disappearance, such as; detention at targeted locations, sexual assault, beating using whips, cables, and bats, electrocution, denailing, suspension for days, scorching, prevention of eating, drinking, sleeping, and using toilets for long periods, stripping abductees, prevention of sunlight exposure for as long as 12 months, cutting down meals to one little meal a day, and starvation.

Abductees were, also, subjected to various methods of psychological torture including; defaming using media, abducting victim’s children and using them as leverage, threatening of raping abductees’ female relatives, humiliating abductees before their families during visits, threatening of murder and using fake execution, and giving false promises of release and freedom.

Due to brutal torture and inhuman mistreatment, many abductees sustained physical and mental traumas, and permanent disabilities. Abductees’ Mothers Association has documented the cases of injuries and traumas as follows; 8 cases of paralysis, 10 cases of mental disorders, 7 cases of stroke, 3 cases of visual impairment, 7 cases of renal function impairment, and 3 cases of hearing impairment. Additionally, women were, also, subjected to torture as the association documented 5 cases of tortured women. However, the names of the victims are kept secret due to social issues.

Moreover, Houthi armed group used the Specialized Criminal Court, which is controlled by Houthis, to sentence 30 civilians to death in a single court rule. The sentenced abductees, who are mostly academics, educators, and students, were arrested at their homes and public places, were subjected to forced disappearance, torture, and defaming, and were unlawfully imprisoned for more than one and half year before starting trials.

Abductees’ Mothers Association monitored the violations against abductees carried out during hearings. 57 abductees were brought to court Specialized Criminal Court, and 47 of them were sentenced to death.

The association’s report highlighted the prevention of contacting families during detention where many prion administrations deny the abductees their right of visit for months for no clear justifications or as a punishment. Only occasional phone calls are allowed during such periods.

Abductees’ Mothers Association continues striving, locally and internationally, to intensify the efforts in order guarantee the abductees and forcibly disappeared persons their rights. Protesting rallies is considered one the most essential actions taken by mothers, as the report introduced a brief description of them.