In Alhudaydah, Abductees’ Mothers Association held a protesting assembly to demand the international community to save their abducted and forcibly disappeared sons while the governorate was witnessing scorching temperatures reaching 50°C.

Mothers declared that their sons were facing unbearable conditions at prisons and detention centers which lacked the most basic needs, such as ventilation and water. Thus, their medical conditions had worsened, especially those suffering asthma and shortness of breath, and contagious skin diseases spread.

During the rally, Abductees’ Mothers Association stated that the association had documented the imprisonment of 100 abductees and forcibly disappeared persons in Alhudaydah, 89 of whom were held by Houthi armed group and 11 held by the resistance combined forces at the west coast. For many years, abductees had been held at official and secret detention centers. Currently, some of them had been held inside shipping containers despite the horrible heat wave. They had been deprived of all their rights and their case had been ignored by all international human rights organizations and negotiating parties.

The rally statement demanded the international community to mount the needed pressure and take the necessary actions to release the abductees, and arbitrarily arrested and forcibly disappeared persons from the inhuman prisons, and provide the proper medical care. 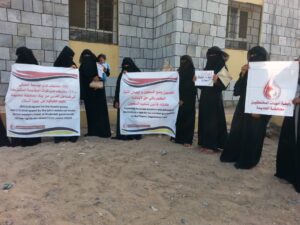 The statement held Houthi armed group and the West Coast Forces fully responsible for the lives and safety of our abducted sons held by them. It called upon human rights organizations and activists, locally and internationally, to mount pressure on abducting parties, and to support their abducted and forcibly disappeared sons before being dying of this awful heat wave.