In Aden, Abductees’ Mothers Association held, this morning at Alorood Sequare, a protesting rally to hold Security Belt forces completely responsible for the lives of the arbitrarily arrested and forcibly disappeared individuals imprisoned in Aden. 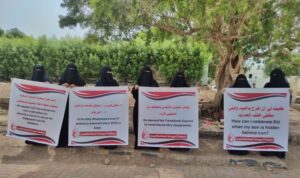 In its statement, the association declared that 40 arbitrarily arrested individuals and 43 forcibly disappeared persons were still held prisoners at Security Belt prisons in Aden.

It also stated that the abductees lived under tragic conditions where they lacked the basic medical services and minimum humanitarian needs, such as ventilation and clean water. 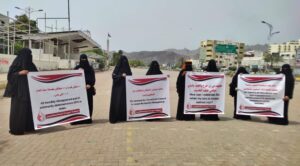 Moreover, their medical conditions had worsened with the extreme heatwave and power blackouts that last as long as 16 hours a day, as well as the outbreak of COVID-19 and skin diseases in the prisons.
The association members, also, stated that their sons had been forcibly disappeared and arbitrarily detained for 5 years. Mothers suffered the pain of longing to them and the agony of not knowing their medical conditions.

All they knew was that they faced oppression, injustice, torture, and unknown future. They wondered if mothers would be delighted by being reunited with their sons and holding them in their arms on Eid Aladha?
Abductees’ Mothers Association held Security Belt forces completely responsible for the lives of the arbitrarily arrested and forcibly disappeared persons, and demanded saving them from such inhuman conditions at prisons, especially during these times of heatwave and COVID-19 outbreak.
Mothers called upon the International Committee of the Red Cross to visit prisons in Aden, namely Be’er Ahmed Prison, and to take the necessary actions to grant the detainees their basic and medical needs. They, also, called upon the international community to mount the needed pressure on the Southern Transitional Council to uncover the fate of the forcibly disappeared persons, and to prioritize their case in the coming Riyadh Agreement agenda.