Abductees’ Mothers Association held both Houthi and the government negotiating teams in Geneva responsible for prolonging the implementation of the agreements and promises of releasing abductees and forcibly disappeared persons. 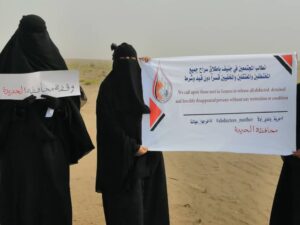 In today’s rally in Al-Hudayda, mothers said that there were 200 abductees from Al-Hudayda held by Houthi armed group in horrible conditions, 92 of whom were forcibly disappeared and their families knew nothing of their medical conditions.

Mothers demanded the United Nations, its Special Envoy, and the International Community to work on easing the suffering of their sons, and to pressure all parties to implement the international resolutions in order to immediately and unconditionally release their abducted and forcibly disappeared sons held by Houthi armed group. 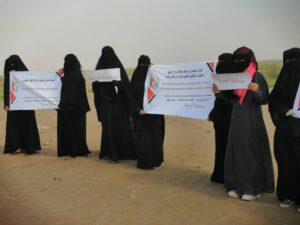 The rally statement emphasized that negotiations started and ended while abductees were still behind bars in an inhumane suffering, and with each agreement, mothers’ hopes of releasing their sons faded.