In Taiz, Abductees’ Mothers Association stated that 305 abductees from Taiz were still detained at Houthi prisons where they had been subjected to torture and mistreatment and that 31 of them were suffering from chronic diseases, yet had not been provided with the necessary medical care. 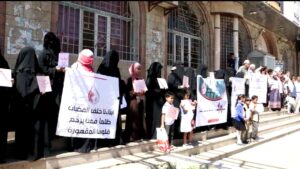 In their rally held this morning by the governorate administration building, mothers declared that while there had been several suspected cases of Covid-19 at Alsaleh Prison in Taiz, no medical care was provided in prison in order to stop the spread of the disease among abductees.

The rally statement called upon the United Nations, its Special Envoy, and all human rights organizations to step up the pressure on Houthi armed group until all abductees and forcibly disappeared persons are free. It expressed the heart-breaking conditions abductees’ mothers, wives, and children live in as Eids and occasions pass by them.

The statement was concluded by stressing on the importance of the immediate release of their abducted and forcibly disappeared sons from Houthi prisons unconditionally.