Abductees’ Mothers Association demanded, on the International Day of the Disappeared, to uncover the fate of 236 civilians, who were forcibly disappeared, 90 of whom had been disappeared since 2015. 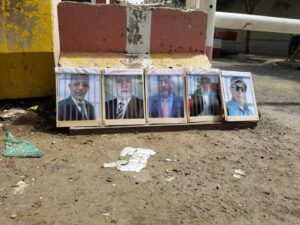 In its rally by the OHCHR in Sana’a this morning, the association stated that, during forced disappearance periods, victims’ right of contacting their families or anyone outside prison was not the violated right. They were brutally tortured and inhumanely mistreated. 81 forcibly disappeared individuals had died as a result of such cruel torture and their families could only see them as dead bodies. 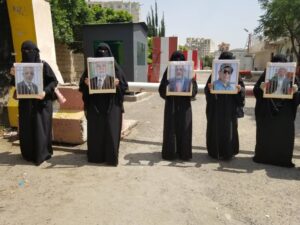 During the rally, mothers of abductees held banners showing photographs of many forcibly disappeared individuals calling upon the United Nations and its Special Envoy to step up the pressure on the violating parties, Houthi armed group, Southern Transitional Council, and the government, to uncover the fate of the forcibly disappeared persons as many of them had been included in the exchange lists, so why not grant them the right to contact and see their families? They asked. The association called upon the Security Council to take deterrent actions to punish the perpetrators of forced disappearance. 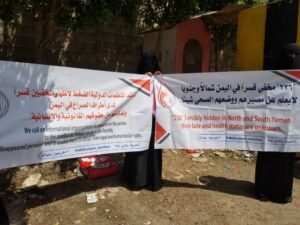 The rally statement said that victims had been repeatedly detained at targeted buildings and areas, placing their lives at great risk as dozens of forcibly disappeared abductees had been killed during bombings, where families were either devastated to see their relatives’ names on the dead lists, or got more worried and scared for the disappeared ones.

In documented statements by victims’ families, Rehab, a daughter of a forcibly disappeared individual, said “I am really scared. My mother, siblings, grandfather, and the whole family is worried that my father might be infected with Corona Virus. He is sick and has been suffering from diabetes and hypertension. Dad, are you okay? Do you take your medications? Are they properly taking care of you?” 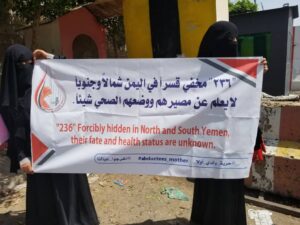 The rally statement, also, explained the lingering effects of forced disappearance, as many victims tended to isolate themselves, and felt claustrophobic, serious fear, and helplessness. Sameer, an alias name, said “I can no longer live like normal people.

I have sleeping disorder now. I am always in constant fear for my family. They used to threaten me with my children and family in my detention.”