Abductees’ Mothers Association was invited to participate in a seminar that was arranged by Arab Strategic Research Institution, yesterday, in Istanbul. During the seminar, the association representative and its head, Amat Assalam Al-Haj, talked about founding the association which was a result of arbitrary arrest and detention of hundreds of innocent civilians which, in turn, has resulted in the suffering of the abductees’ mothers and families. 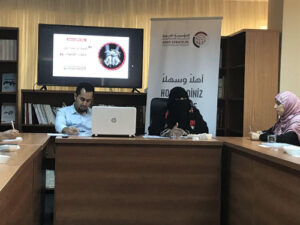 Al-Haj covered the matter of the 36 abductees who were sentenced to death by Houthi armed group after three years of abduction and physical and psychological torture. She explained how those abductees had been defamed prior to their two-year groundless trial. Al-Haj, furthermore, talked about the unfair prisoners’ exchange deals where innocent civilian abductees are exchange with soldiers and war prisoners where had been captured during armed clashes.

A number of parliament members, political figures, legal advisors, and activists attended the seminar in support of abductees’ and their cause.