Yemeni parties in Amman keep ignoring mothers’ calls and pleas to release ill abductees. The request of their unconditional release has been denied. Thus, many more years and months will pass by us, abductees’ mothers and families, while we still live in pain and fear for hundreds of our abducted and forcibly disappeared sons who have been illegally detained and disappeared for five years at Houthi prisons. 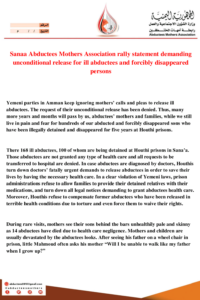 There 168 ill abductees, 100 of whom are being detained at Houthi prisons in Sana’a. Those abductees are not granted any type of health care and all requests to be transferred to hospital are denied. In case abductees are diagnosed by doctors, Houthis turn down doctors’ fatally urgent demands to release abductees in order to save their lives by having the necessary health care. In a clear violation of Yemeni laws, prison administrations refuse to allow families to provide their detained relatives with their medications, and turn down all legal notices demanding to grant abductees health care. Moreover, Houthis refuse to compensate former abductees who have been released in terrible health conditions due to torture and even force them to waive their rights.

During rare visits, mothers see their sons behind the bars unhealthily pale and skinny as 14 abductees have died due to health care negligence. Mothers and children are usually devastated by the abductees looks. After seeing his father on a wheel chair in prison, little Mahmoud often asks his mother “Will I be unable to walk like my father when I grow up?” 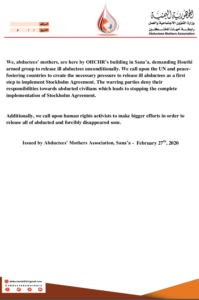 We, abductees’ mothers, are here by OHCHR’s building in Sana’a, demanding Houthi armed group to release ill abductees unconditionally. We call upon the UN and peace-fostering countries to create the necessary pressure to release ill abductees as a first step to implement Stockholm Agreement. The warring parties deny their responsibilities towards abducted civilians which leads to stopping the complete implementation of Stockholm Agreement.

Additionally, we call upon human rights activists to make bigger efforts in order to release all of abducted and forcibly disappeared sons.