Years and months have passed by mothers who are hopefully waiting for the cases of their abducted and forcibly hidden sons to be solved and their basic human rights to be granted. Their sons’ rights have been increasingly violated at prisons and detention centers they are held at. Their health is neglected while they have been starved and tortured, sometimes to death, as well as forcibly hidden. 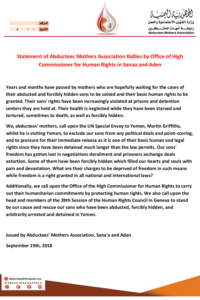 We, abductees’ mothers, call upon the UN Special Envoy to Yemen, Martin Griffiths, whilst he is visiting Yemen, to exclude our sons from any political deals and point-scoring, and to pressure for their immediate release as it is one of their basic human and legal rights since they have been detained much longer than the law permits. Our sons’ freedom has gotten lost in negotiations derailment and prisoners exchange deals extortion. Some of them have been forcibly hidden which filled our hearts and souls with pain and devastation. What are their charges to be deprived of freedom in such means while freedom is a right granted in all national and international laws?

Additionally, we call upon the Office of the High Commissioner for Human Rights to carry out their humanitarian commitments by protecting human rights. We also call upon the head and members of the 39th Session of the Human Rights Council in Geneva to stand by our cause and rescue our sons who have been abducted, forcibly hidden, and arbitrarily arrested and detained in Yemen.