Abductees’ Mother Association has been looking forward to the outcome of Jordan negotiations regarding the abductees which started last week after failing to agree on the abductees’ terms during Stockholm agreement. We, abductees’ mothers regret the irresponsible procrastination and the temporizing approach to abductees’ exchange deals. We greatly condemn and disapprove the extortion we and our sons go through for their basic rights which is guaranteed by all laws in war and peace times. 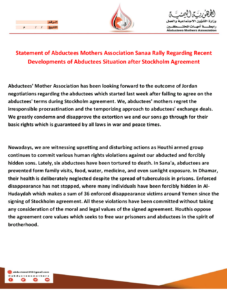 Nowadays, we are witnessing upsetting and disturbing actions as Houthi armed group continues to commit various human rights violations against our abducted and forcibly hidden sons. Lately, six abductees have been tortured to death. In Sana’a, abductees are prevented form family visits, food, water, medicine, and even sunlight exposure. In Dhamar, their health is deliberately neglected despite the spread of tuberculosis in prisons. Enforced disappearance has not stopped, where many individuals have been forcibly hidden in Al-Hudaydah which makes a sum of 36 enforced disappearance victims around Yemen since the signing of Stockholm agreement. All these violations have been committed without taking any consideration of the moral and legal values of the signed agreement. Houthis oppose the agreement core values which seeks to free war prisoners and abductees in the spirit of brotherhood. 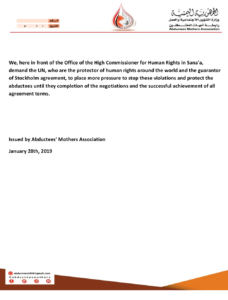 We, here in front of the Office of the High Commissioner for Human Rights in Sana’a, demand the UN, who are the protector of human rights around the world and the guarantor of Stockholm agreement, to place more pressure to stop these violations and protect the abductees until they completion of the negotiations and the successful achievement of all agreement terms.