Abductees’ Mothers Association organized, today morning, two protesting rallies, one held by Security Management headquarters and the other by the gate of Al-ma’asheek. These rallies were a part of series demands to uncover the fate of abductees and forced disappearance victims, and to either release or have the abductees fairly tried. 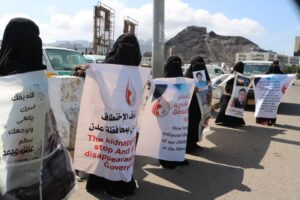 During the rally, mothers had a meeting with the director of Aden Security Management administrator office, Colonel AbdulDa’em Al-Dhale’I, in his office where they discussed forced disappearance case file. 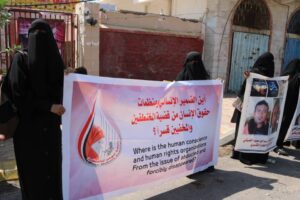 In the rally statement, mothers explained that as preparations of appointing a new security administration in Aden went on, as Jeddah Agreement stated, mothers fears and worries over the fate of their forcibly hidden sons escalated. 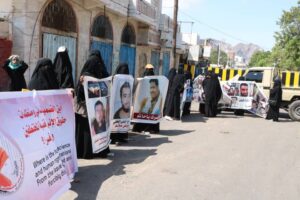 The statement demanded to immediately uncover the fate of the abductees who had been forcibly hidden for three years. It added that there were 37 cases of forced disappearance where victims had been initially arrested by security organizations acting under the orders of Security Management, and that abductees’ whereabouts, physical conditions, and was still known.