Abductees’ Mothers Association’s members called to save their arbitrarily arrested sons after reporting several blackout cases of abductees due to the hunger strike, they have gone on at Be’er Ahmed Prison in Aden in protest to prolonging their legal procedures. 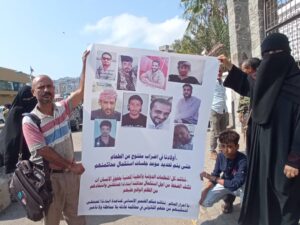 In their rally by the Criminal Court in Crater, Aden, mothers said that 14 arbitrarily arrested individuals had been continuing their hunger strike at Be’er Ahmed Prison, protesting holding off legal procedures in Aden which led to completely stopping the legal processes of their cases for years. 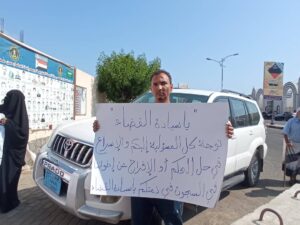 Mothers stressed that the lives of the arbitrarily arrested persons at Be’er Ahmed Prison were in grave danger due to their hunger strike which had resulted in several cases of blackout and health deterioration.

The rally statement held the competent authorities accountable for the well-being and safety of their detained sons, and the mistreatment they are subjected to, and reiterated mothers’ demands to the government to take serious actions in order to resume the legal procedures of their cases, and to end their suffering as it had worsened with their prolonging of their detention. 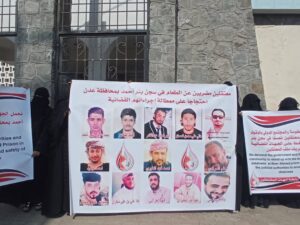