The older brother’s phone rang and he picked up looking around at his family members watching him expectantly. Once he hung up, his mother asked “What is it? Are they going to release Waleed?”

“What shall I tell my mother, and his newly married wife?” he thought. Nabeel, the older brother, answered that the call was from the commanding officer of Houthies in Criminal Investigation Prison, at Aladl street in Sana’a, asking him to take Waleed’s body. It was Tuesday, November 15th, 2016. 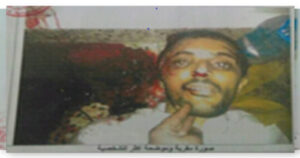 It had been only four days since Waleed was abducted by Houthies which was on the night of November 10th, 2016. While he was going home from a family visit to his in-laws, after Maghreb prayers, several army pickups, with armed Houthies dressed as civilians and military, stopped him near Alhamza mosque at Western Juraf area. They forcefully took him after scaring people away by shooting upwards and left his wife crying when she could not hold on to him.

One hour went by excruciatingly slowly to the devastated wife and family. They, then, started looking for him for three days at different police stations.
During the investigation, which no one ever knew what it was about, Waleed was shot in the head from a close distance and there were different torture marks and injuries on his body, according to medical examiner.
Houthies did not only stop at killing him, they tried to pressure the family to sign a confession that Waleed committed a suicide, but the family members refused to give in to that pressure.