WeAbductees’ Mothers Association made an urgent call to save the lives of 114 civilian abductees, 48 of who are sick, who have been held at Political Security Prison in Sana’a for more than 5 years. 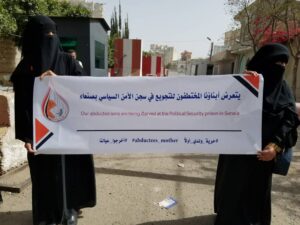 In their rally by the Office of the United Nations High Commissioner for Human Rights in Sana’a, mothers said that their sons had been subjected to systematic starvation by Houthi armed group.

During the rally, mothers banged on metal plates trying to deliver the cry of their starved sons to human rights organizations.  Mothers declared that, during their visits, they could obviously see their starvation and malnutrition of their sons as they wait for the one meal their families make once per fortnight. 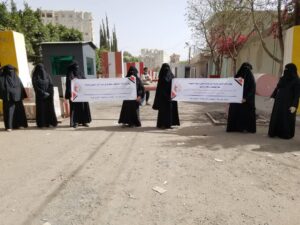 In its call, Abductees’ Mothers Association held Houthi armed group accountable for the lives and safety of all abductees held at the prison, and to demanded their immediate release. 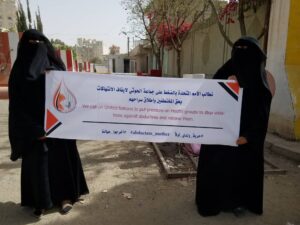 The association called upon the UN and its Special Envoy to mount the necessary pressure upon Houthi armed group in order to stop the violations against abductees and unconditionally release them.