This forms a grave defiance by the Houthis to international laws, norms and treaties.

While the world works at improvement of women’s dignity and women’s rights empowerment, wet at the association have received several reports on women’s abduction.

Khaleda Al-Asbhi, 52 years old is one of the victims to abduction by the Houthis militia. She was kidnapped on 22 May 2018 while out on a street of Sana’a city for taking her grandson to the hospital at 6:00 pm. She never returned home until today.

Al-Asbhi was taken to a secret detention center in the capital Sana’a. Her son was kidnapped along with her and was exposed to physical torture and solitary confinement for 15 days. 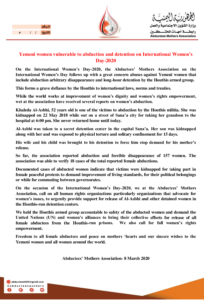 His wife and his child was brought to his detention to force him stop demand for his mother’s release.

Documented cases of abducted women indicate that victims were kidnapped for taking part in female peaceful protests to demand improvement of living standards, for their political belongings or while for commuting between governorates.

On the occasion of the International Women’s Day-2020, we at the Abductees’ Mothers Association, call on all human rights organizations particularly organizations that advocate for women’s issues, to urgently provide support for release of Al-Asbhi and other detained women in the Houthis-run detention centers.

We held the Houthis armed group accountable to safety of the abducted women and demand the United Nations (UN) and women’s alliances to bring their collective efforts for release of all female abductees from the Houthis-run prisons.  We also call for full women’s rights empowerment.

Freedom to all female abductees and peace on mothers ‘hearts and our sincere wishes to the Yemeni women and all women around the world.