Abductees’ Mothers Association held, today, a protesting rally by the governorate administration in Taiz, in conjunction with International Day of the Disappeared, August 30th. During the rally, a joint statement issued by Abductees’ Mothers Association and Defense Foundation for Right and Freedom was given, where both organizations reiterated their demands for the local and international community to stand with the families of the forcibly disappeared, and to combine their efforts to uncover the victims’ fate. They demanded the government to sign the International Convention for the Protection of All Persons from Enforced Disappearance, and to clearly draft the necessary national laws that criminalize forced disappearance and heavily punish the perpetrators. 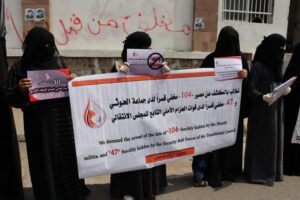 They urged the United Nations to activate its agencies and NGOs in order to provide the needed psychological support for the victims of forced disappearance and their families.

They, also, demanded the Security Council to implement deterring processes and punishments for the perpetrators of forced disappearance in Yemen. 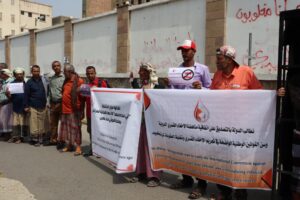 The victims of forced disappearance have been facing life-threatening danger at prisons and secret detention centers, as 40 civilians have died due to torture while being forcibly disappeared. Additionally, Houthi armed group deliberately holds the forcibly disappeared at building and facilities targeted by air force, which has led to the death of 21 forcibly disappeared civilians. Moreover, 14 forcibly disappeared had been suffering chronic diseases before abduction, and yet their families have had no clue of their medical conditions for years. 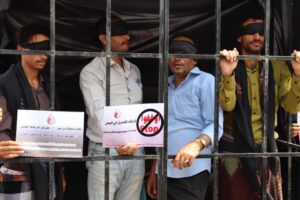