Our 1,839 detained relatives have been in illegal confinement for five successive years with no legal justification. They are civilians who were arbitrarily taken from homes, streets and public places for their views, political belongings, or their ideological or religious beliefs. While in illegal detention, they have been vulnerable to forcible disappearance in secret detention centers.

These abductees and forcibly disappeared people are being held by the Houthis armed group in “244” formal prisons and “112” secret detention centers. During the past five-year confinement, detainees suffered brutal physical torture that paralyzed 11 abductees. They live in fear and coercion. They are constantly threatened by death, rape of their children and wives. This caused 20 detainees to suffer psychological and mental disorder. 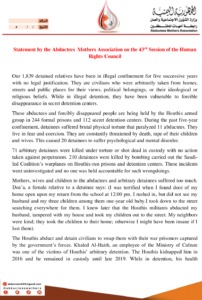 71 arbitrary detainees were killed under torture or shot dead in custody with no action taken against perpetrators. 210 detainees were killed by bombing carried out the Saudi-led Coalition’s warplanes on Houthis-run prisons and detention centers. These incidents went uninvestigated and no one was held accountable for such wrongdoings.

Mothers, wives and children to the abductees and arbitrary detainees suffered too much. Doa’a, a female relative to a detainee says: I was terrified when I found door of my home open upon my return from the school at 12:00 pm. I rushed in, but did not see my husband and my three children among them one-year old baby.

I took down to the street searching everywhere for them. I knew later that the Houthis militants abducted my husband, tampered with my house and took my children out to the street.

My neighbors were kind; they took the children to their home; otherwise I might have been insane if I lost them.

The Houthis abduct and detain civilians to swap them with their war prisoners captured by the government’s forces.

Khaled Al-Haith, an employee of the Ministry of Culture was one of the victims of Houthis’ arbitrary detention. The Houthis kidnapped him in 2016 and he remained in custody until late 2019. While in detention, his health deteriorated and the Houthis denied his release and provided that he be exchanged for a Houthis prisoner.  Attempts for his release failed until he died in custody. 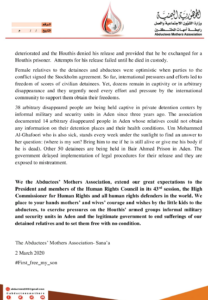 Female relatives to the detainees and abductees were optimistic when parties to the conflict signed the Stockholm agreement. So far, international pressures and efforts led to freedom of scores of civilian detainees. Yet, dozens remain in captivity or in arbitrary disappearance and they urgently need every effort and pressure by the international community to support them obtain their freedoms.

Um Mohammed Al-Ghafoori who is also sick, stands every week under the sunlight to find an answer to her question: where is my son? Bring him to me if he is still alive or give me his body if he is dead.

Other 50 detainees are being held in Bair Ahmed Prison in Aden. The government delayed implementation of legal procedures for their release and they are exposed to mistreatment.

We the Abductees’ Mothers Association, extend our great expectations to the President and members of the Human Rights Council in its 43rd session, the High Commissioner for Human Rights and all human rights defenders in the world. We place to your hands mothers’ and wives’ courage and wishes by the little kids to the abductees, to exercise pressures on the Houthis’ armed groups informal military and security units in Aden and the legitimate government to end sufferings of our detained relatives and to set them free with no condition.